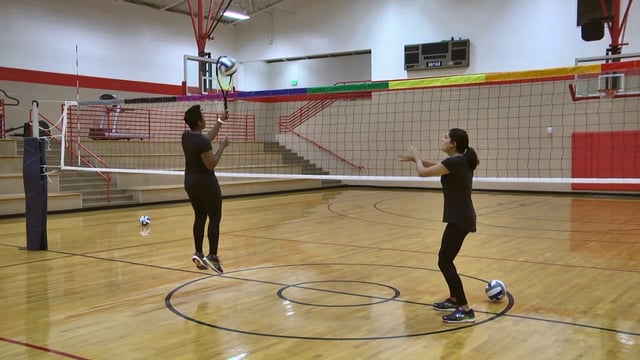 Every middle has a different approach and they all hit at various heights. The most successful setters not only have the control to set a consistent ball to the hitter’s arm-reach, but also can feel if the hitter’s approach is fast to give her a quicker tempo set. Likewise, if the hitter is late or approaching slowly, a setter needs to learn how to give her a “loopier” set to the desired hitting location.

Let’s take you at the drill:

Objective:
A setter must feel the tempo of the middle hitter’s approach in order to successfully connect the set to the attack. This drill is designed to improve the vision and ability to feel a hitter’s approach by using a tennis racket as a visual and target.

Keys for Drill Success:
– Make sure the setter at the net is in a good “ready to run” position. Having bent knees is key to expanding peripheral vision. If a setter is standing up straight at the net, and the ball is passed high, she will have a hard time feeling the approach of her middle hitter.
– The player with the tennis racket needs to alternate her tempo of approach in order to accomplish the goal of this drill. This will help the setter begin to feel if the approach is fast, thus resulting in a quicker set, or if the approach is late, which results in a higher set to the same attacking area.
– The player with the tennis racket should put the tennis racket’s head as high as the realistic height of the middle hitter as the target for the setter to hopefully make contact with the ball.

Do the Drill:
– The setter at the net begins in her “ready-to-run” position
– The player with the tennis racket will begin in the middle of the court, around the 10ft (3m) line (wherever the realistic starting position of your middle hitter would be).
– The tosser can alternate high and low tosses to the setter in addition to moving her anywhere from 3-5 ft (1-1.5m) away from her base position.
– The player with the tennis racket watches the pass and approaches, changing up her tempo of approach each toss.
– This drill can be done setting all of the middle hitter’s sets
– This drill is great to train the vision of a jump set as well. Refer to the jump setting technique videos to learn proper technique.

22
SHARES
ShareTweet
Category On the Court

Need help understanding a drill? Have a drill idea? Send us a note!